2. Trading Odell Beckham Jr. to the Browns for a 1st and 3rd-round pick AFTER signing him to a 5-year $90-million contract 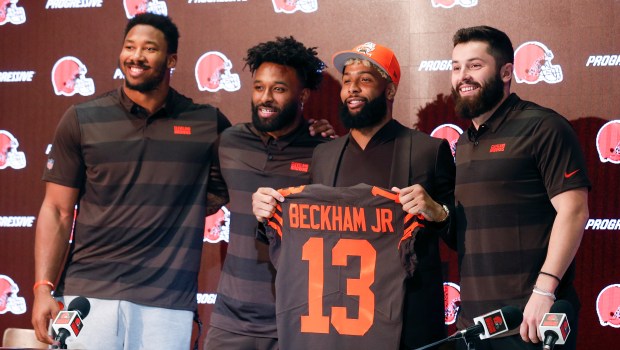 The New York Giants may be having the worst offseason that they have had in a very long time. Second-year GM Dave Gettleman has not endeared himself to the fanbase at all by making some…interesting roster moves. One of those interesting moves involved 3-time Pro Bowl wide receiver Odell Beckham Jr. While his production on the field was meteoric, his outlandish antics away from the playing field drew much criticism and was beginning to grow tiresome to ownership. Nonetheless, OBJ was rewarded with a brand new 5-year, $90 million dollar contract that would see him make more than $14 million per year. In a more stunning move, the Giants would then trade Odell Beckham Jr. to the Cleveland Browns for a 1st-round and a 3rd-round pick. There was possible speculation of the move throughout past seasons due to Odell’s issues off the field, but few would have thought that it would actually happen. If the move was made as is, it actually would not have been the most terrible move as the Giants looked like they are approaching a rebuild of sorts and trading assets of the previous regime is a common practice. What makes this move completely terrible is the fact that Dave Gettleman gave Beckham a huge contract which actually made his job harder to trade him. It is much easier to trade a player that makes $1,459,000 than a player that will make a $20 million dollar salary that is guaranteed. The move could’ve backfired severely if it wasn’t for Beckham’s skill set and name recognition. However, this was not the most questionable the team has made.